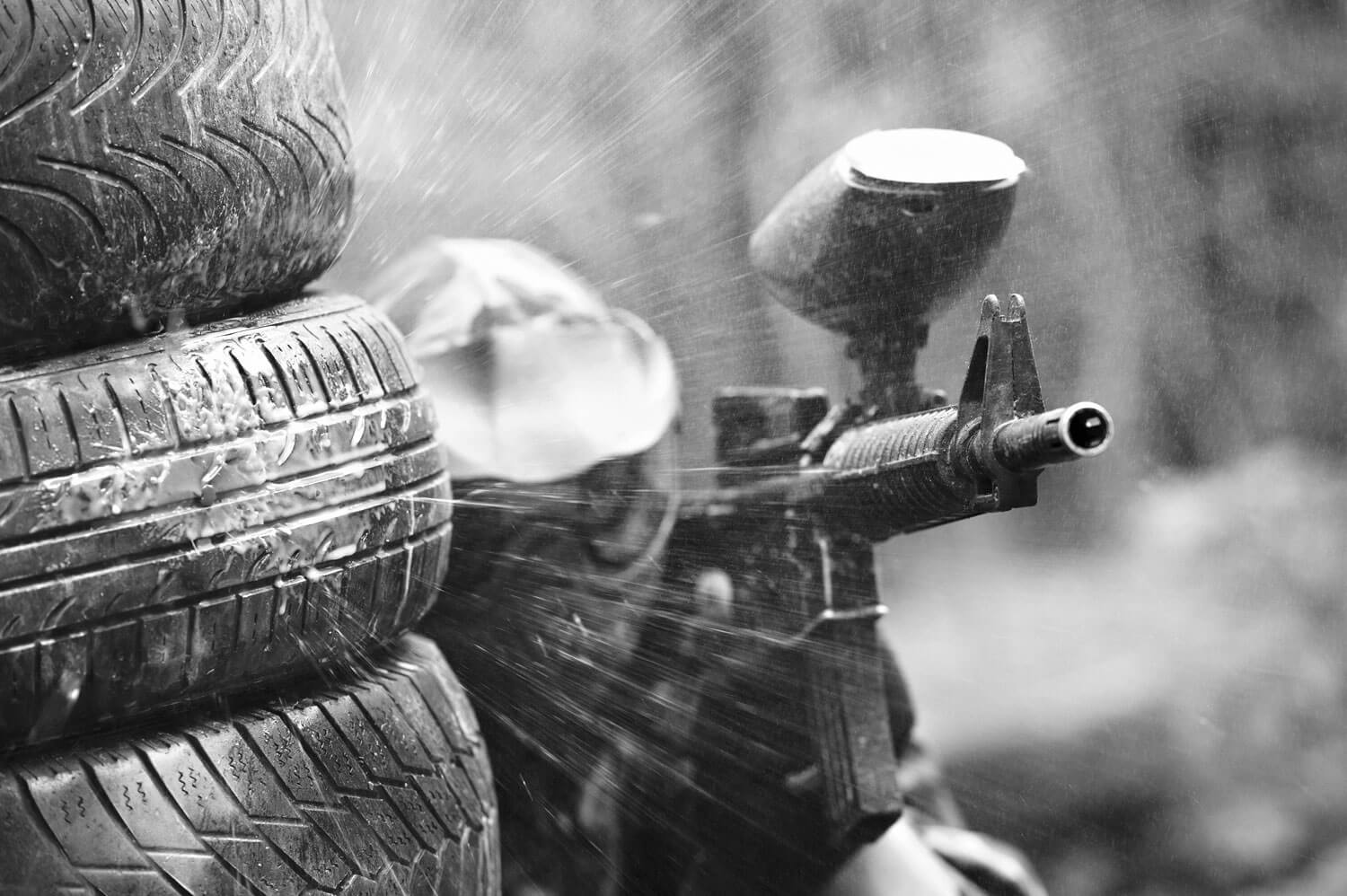 Tippmann
Cronus
It’s clear that the Tippmann Cronus was built by some exceptionally skilled paintball engineers. It’s durable and will only break if you sabotage it. It’s simply designed, shoots quickly and accurately, and it’s easy to maintain. If it’s your first time buying a paintball gun, this is the one for you. Happy hunting!

Paintball is one of the most fun-filled things to do. If you are reading this, you are probably better than most people and want to know what your options are. You’ve finally decided that those basic guns are not good enough anymore. Maybe you’ve decided it’s time to move from recreational play to playing in tournaments.

You’ve first got to know that there are two types of guns. On one hand, we’ve got mechanical guns which are simple and relatively cheap, easy to maintain, and mostly aimed at beginners. On the other, we’ve got electro-pneumatic guns which are complex and rather expensive. They use a battery, have programmable fire modes, and they offer a choice of ball-per-second settings.

Mechanical guns use high pressured air (HPA) and carbon dioxide (CO₂), while the electro-pneumatic guns should only use HPA.

Choosing the best paintball gun is not an easy task. There are hundreds of models available. We will review three different guns we think are the best and try to give you enough information for you to make a choice.

“The Empire Axe is an incredible marker. It’s very reliable, easy to maintain, and is a blast to play with. I’ve had mine for about 3 years now.”
-tim

“The Empire Axe is an incredible marker. It’s very reliable, easy to maintain, and is a blast to play with. I’ve had mine for about 3 years now.”
-tim

Professional paintball players agree that this is one of the best paintball guns you can buy. Especially for this kind of money.

Here are the key features:

Ease of use and easy maintenance means that it can accommodate any player, any style, and playing field, recreational or professional. The gun hardly has any recoil (that’s the amount of backward momentum you experience from the gun after you fire it). The gun is smooth and accurate.

With a good HPA tank and a quick-feed paintball loader, this gun can go through the whole loader in less than 30 seconds without you feeling it. Most loaders hold 200 balls. That’s 7 balls-per-second.

The gun is very light and has a frame to accommodate any hand size. The grip is good. You can carry it around for hours without even noticing. The manufacturers assure us that the loader won’t come off because it’s held in place by a special Axe clamp.

Maintenance is easy. You can access the engine by pressing a button. The design is simple and straightforward which makes the gun easy to re-assemble after maintenance. Experts suggest putting a bit of lube into the regulator before first use.

When you buy your gun, you get a tool kit from Empire. It contains everything you need for maintenance, including lube, screws, detents, O-rings, and Allen keys for opening the gun.

“You will not be disappointed. Heavier profile barrel, very rugged construction, simple and quite accurate out of the box.”
-Amazon Customer

“You will not be disappointed. Heavier profile barrel, very rugged construction, simple and quite accurate out of the box.”
-Amazon Customer

Maybe you can’t get your hands on an original American legend, the M-16. But you can buy the paintball version of the very same M-16. Tippmann have made an M-16 styled gun with an impressive performance. These are just some of its features:

The Alpha Elite is fully customizable. You can change the shroud and stock or add various accessories like a front grip, laser or tactical lights. Once you remove the carry handle, you expose another picatinny rail for you to put more accessories on. Bear in mind that the loader might block the function of whatever you mount on the upper rail.

The gun is made from dye-cast aluminum so it’s strong and rugged. You don’t have to worry about breaking it. The stock has 6 points of adjustment so you set the length to suit your playing style.

You won’t feel any recoil from the gun while firing. It can fire up to 15 balls-per-second. Effective range of the gun is a maximum 150 feet. At 4.7 pounds it’s not too light but that’s not a bad thing. Some people, including myself, like a paintball gun which feels like a gun and not like a toy.

It can also be upgraded with an electric package and a Cyclone feeder. Then you’d be able to fire in semi-auto and full-auto modes.

The US army series Black Elite is affordable, reliable, appealing, and customizable. These four things make it very attractive to potential buyers, especially to beginners.

“Played for 5 hours straight, and not a single chopped ball, consistent pressure and accuracy! Turned a lot of heads at the field too! ? sturdy, accurate, consistent. What else would you expect from Tippmann.”
-Tim Z

“Played for 5 hours straight, and not a single chopped ball, consistent pressure and accuracy! Turned a lot of heads at the field too! ? sturdy, accurate, consistent. What else would you expect from Tippmann.”
-Tim Z

With the Cronus, the guys at Tippmann have created a great gun for beginners and intermediate players alike. They have designed a cool-looking, affordable, durable gun that can withstand any outdoor environment. Here are the key features:

The weight of the gun is 3.7 pounds, a whole pound lighter than the Black Elite. The effective range is the same: 150 feet. This gun has medium/high accuracy and almost no recoil. At an extra cost, the gun can be upgraded to a complete tactical gun.

Customers who have bought the Cronus report that it’s an easy to hold, low recoil, and balanced shooter. The molded grips also do their job well, while the ergonomic design keeps the gas tank away from you. Maintenance is easy. You just oil it from time to time. With regular maintenance, this gun can easily last you a decade.

If the basic, mechanical Cronus is not enough, you can buy the Cronus Tactical Edition by spending a little more. We are not all the same – our playing styles vary. The Cronus is easy to customize so each of us can have a unique gun.

One fault with this gun is the stock barrel which has a range of only 75 feet. It would be worth investing in a proper sized barrel to increase the range and accuracy.

After reviewing the performance and features of these three guns, it’s clear that one stands. The Empire Axe is the favorite among professionals, too.

While the Empire Axe is an all-around excellent gun, some might not want to invest that much in their first paintball buy.

The Tippmann guns, the Black Elite and the Cronus, deliver similar features and performance, but one is more stylish than the other. You could customize both until you run out of money. The Black Elite is slightly heavier which might present a problem in long tactical play scenarios where endurance is key.

At least for me, the Cronus is the most impressive looking one out of the three guns.

Tippmann
Cronus
It’s clear that the Tippmann Cronus was built by some exceptionally skilled paintball engineers. It’s durable and will only break if you sabotage it. It’s simply designed, shoots quickly and accurately, and it’s easy to maintain. If it’s your first time buying a paintball gun, this is the one for you. Happy hunting!